July 9, 2020 — The John F. Kennedy Center for Performing Arts selected Liss LaFleur, assistant professor of studio art, as one of only seven Citizen Artist Fellows for 2020-2021. Each fellow is geographically based to represent a region and LaFleur — the first fellow from Texas — will represent the U.S. Southwest. 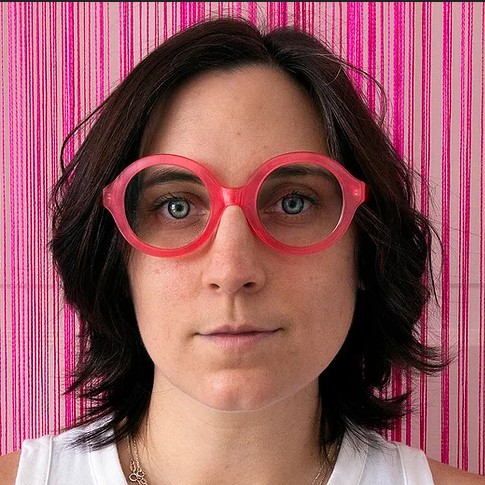 "As a new media artist, I produce work at the intersection of art, technology, and Future Feminist discourses. Through video, performance and installation art, I question power and oppression in relation to identity and image-making. Central to my practice is an investigation of glass, a material that I explore conceptually, physically, and digitally, to reference the body in flux," said LaFleur.

"Until now I hadn’t considered myself a "Citizen Artist,” although my values definitely align with the five ideals that John F. Kennedy demonstrated — service, justice, freedom, courage and gratitude. Last semester, I established the Future Feminist Lab and was able to teach the first class from it in CVAD. It was the first time my activism, creative research, and pedagogy overlapped into one cohesive impactful space and is something I hope to continue developing as a Citizen Artist. I can’t think of a more critical time for all artists to engage and evaluate their impact within both a local and global community — whether that's fighting for equality, against racism, or for climate change," said LaFleur.

The Kennedy Center is considered a national cultural center and is located on the Potomac River, adjacent to the Watergate complex in Washington, D.C., and was named in 1964 as a memorial to President John F. Kennedy.

Through the Citizen Artists Fellows program, the Kennedy Center uplifts citizen artistry, providing selected fellows with customized resources and support to advance their work. During their year-long engagement, Citizen Artist Fellows develop and strengthen connections in their fields, receive opportunities for artistic collaboration and presentation, and gain access to Kennedy Center Staff and Artistic Partners for individual professional development. In return, the Citizen Artists enrich the Kennedy Center community, helping people understand broader issues, reach new audiences, and learn through the power of their art.

The Kennedy Center, a living memorial to President John F. Kennedy, honors our 35th President everyday by uplifting ideals from his legacy of service, justice, freedom, courage, and gratitude that live through the arts. As part of this celebration of legacy, the Kennedy Center launched the "Citizen Artist Fellow Recognition" in 2016, which celebrates emerging artists across the country who utilize their art form for a positive impact on communities.

Liss LaFleur (b. 1987, Humble, TX) is an interdisciplinary artist who works with video, new media, and performance. Through the merging of digital and physical space, she explores queer identity, the future of feminism, and historical narratives.

In 2018 she was named an Immersive Scholar by the Andrew W. Mellon Foundation and began exploring the urgency of the #metoo movement and the role of social technology in contemporary forms of protest. Made in collaboration with the #metoo Digital Media Collection at the Schlesinger Library at Harvard, she was a finalist for the Edie Windsor Coding Fellowship, and nominated for a 2019 Webby Award for this ongoing project.

From 2012 – 2013, LaFleur was a media researcher on the Ford Foundation Advancing LGBT Rights Initiative, “Out for Change: Transmedia Organizing Network” at the MIT Media Lab. She received an M.F.A. in Media Art with honors from Emerson College.