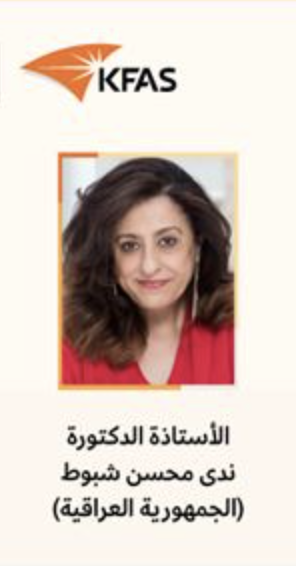 May 27, 2021 — The Kuwait Foundation for the Advancement of Sciences Board of Directors has announced Nada Shabout is a recipient of the 2020 Kuwait Prize for Arts and Literature as endorsed by His Highness Sheikh Mishal Al-Ahmad Al-Jaber Al-Sabah, the Crown Prince of the State of Kuwait and the Chairman of the KFAS Board.

Shabout, CVAD professor of art history, is recognized by KFAS for "significantly contributing to the understanding of contemporary Arab visual art, its trajectories with international movements, and on the Historiography of Arab art and its influence on world civilizations."

“I am thrilled and honored to receive this recognition for my work from the Kuwait Foundation for the Advancement of Sciences. It means a lot on a personal level to see that my work is appreciated in the Arab World as well,” Shabout said.

Aimed at recognizing the lifetime achievements of Arabs across the globe, this prestigious prize was introduced in 1979. The Kuwait prize has witnessed a surge of applications from Arab researchers everywhere and is awarded in five fields, four of which are announced annually for Arabs (Basic Sciences, Applied Sciences, Economics and Social Sciences, Art and literature), and the fifth field, which is Arabic and Islamic Scientific Heritage - Science (Applied and Basic Science and Mathematics), is announced every third year for all nationalities. The prize comes with a monetary award, gold medal, and a KFAS shield.

KFAS, a private non-profit organization was established in 1976 by an Amiri Decree under the direction of the late Amir of Kuwait, HH Sheikh Jaber Al-Ahmad Al-Jaber Al-Sabah to promote science, technology and innovation. The Kuwait Prize, established in 1979, aims to support and encourage Arab researchers in various disciplines.

Note: Should you need reasonable accommodation due to a disability to fully participate in a CVAD event, please contact the CVAD Dean's Office, cvad@unt.edu, 940-565-4001. For voice access, dial 1-800-RELAYTX (735-2989). Please make the request as soon as possible to allow sufficient time to arrange the accommodation.