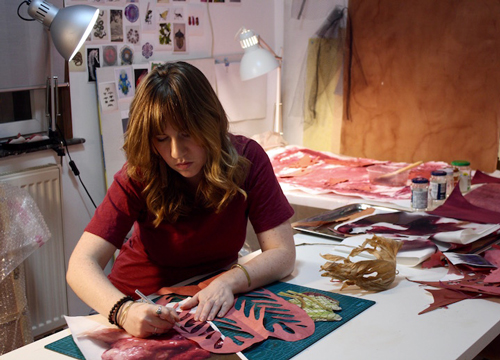 Mary A. Johnson, lecturer, CVAD Foundations, was selected for an online residency of collage artists organized by the Kolaj Institute along with nine other artists. Their charge was to create 63 collages that interpret Eleanor H. Porter's 1918 book, "Oh, Money! Money!" for a 21st-century audience. The book will be released officially during Kolaj LIVE Online on Aug. 22, 2021, where Johnson and five other book artists will be speaking. The residency was conducted in conjunction with “The Money $how” at Saint Kate–The Arts Hotel in Milwaukee, Wisconsin.

"The book is a time capsule of early 20th-century American life with a strong focus on the lives of women and observations about material culture and communities before the rampant consumerism of the 1920s and the Great Depression," according to Kolaj Magazine. Regarding this artist edition published by Kolaj Institute and Maison Kasini Canada, editor Ric Kasini Kadour writes “These artists dragged this book into the 21st Century. In doing that, they open space in which we can consider its antiquated qualities while preserving its valuable insights into the culture of money.”

“This residency gave me time and space, as well as direction, to breathe new life into my practice and relationship with collage," Johnson said. "I learned quite a bit from both the lectures and my fellow resident artists: working with imagery in direct response to a text and strengthening my digital skills. Additionally, our discussions as a group regarding our culture’s response to money, late-stage capitalism and commercialism gave me quite a bit of food for thought. The residency has actually inspired a few new projects in my own practice."

Pre-registration through EventBrite is required for the live online event. The book is available for purchase through the Kasini House Artshop.

The Kolaj Institute's mission "is to support artists, curators, and writers who seek to study, document, and disseminate ideas that deepen our understanding of collage as a medium, a genre, a community, and a 21st-century movement." They operate a number of initiatives meant to bring together community, investigate critical issues, and raise collage’s standing in the art world. The Kolaj Institute works in partnership with Kolaj Magazine.

In Porter’s 1918 novel, a Chicago multi-millionaire struggles to decide to whom he should leave his money. As an eccentric experiment, he schemes to give his three distant cousins one hundred thousand dollars each to see how they handle the windfall. The book is a time capsule of early 20th century American life with a strong focus on the lives of women and observations about material culture and communities before the rampant consumerism of the 1920s and the Great Depression. In telling this story, Porter gives us a look at the role of and attitudes about money that is relevant today. The book raises important questions about the role of money in our lives: What good is money? Is money cruel? How should one handle money? How does money change us?

Johnson holds an M.F.A. from the State University of New York at Buffalo. She has shown her work globally including the New York Hall of Science, the Nekrasov Library in Moscow, and multiple art centers and museums in China. Her work has been in group exhibitions juried by Jerry Saltz and Chang Fang, and collected by the Shanghai Art Collections Museum. Additionally, her work has been included in multiple international publications, including Rebeka Elizegi’s book "Collage by Women: 50 Essential Contemporary Artists." Her studio practice emphasizes the unstable and unreliable. Learn more on Johnson's website, www.maryajohnson.com, and follow her work on Instagram @maryjohnson.studio.

Placard for Image 2:
Mary A. Johnson
Illustration on page spread for 'Oh Money! Money!' (pages 196 and 197), 2021
Digital collage
9.75 x 16 inches
Description: Collage with envelopes and hands made of newspaper clippings with a dark purple background across from the chapter title page that reads: “Chapter XVIII: Just a Matter of Begging, ‘I don’t know what to believe now. And there are all those letters at home that I haven’t answered yet; and they keep coming."

Placard for Image 3:
Mary A. Johnson
Illustration for 'Oh Money! Money!' (page 79), 2021
Digital collage
9.75 x 16 inches
Description: Hand holding an old lamp with a blaze of light coming from it, as well as gems, numbers and fiber optic cables, mostly in gold and gray tones.

Image 4: Mary Johnson is seated at a table working on an art project. Photo courtesy of Fernando Muñoz.