Congratulations to our winners at the 2021 AAF Dallas ADDYs! 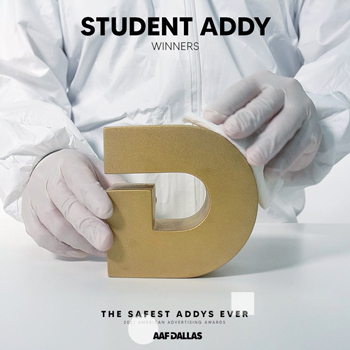 The UNT CVAD Communication Design majors dominated the Magazine Advertising Campaigns with four out of the six medals awarded in that category. Andrew Ashton received the only Gold awarded in the category of Integrated Brand Identity Campaign. Mai-Linh Lillard earned a Bronze Award for her distinctive mobile application design, the only award given in that category.

These campaigns were produced in two CVAD courses: ADES 3545-Communication Design Studio, which has an emphasis on art direction, and ADES 4520 - Graphic Design Advanced Campaigns taught by Douglas May, CVAD assistant professor of communication design.

All Gold ADDY winners advance to the district level of competition with the AAF Dallas sponsoring the continued entries.

If successful at the regional level, the winners will continue to the national level for judging. All student work is judged at each level by leading industry professionals from major advertising agencies across the U.S.