Each spring, thousands of University of North Texas students earn their degrees and become UNT alumni. Every one of them should be tremendously proud of what they've accomplished in their time in Denton. In celebration of our Spring 2021 graduates, below are three stories of those nominated from CVAD out of the 22 from across the campus who were selected. Each student featured was nominated by a UNT student, faculty or staff member and selected by the Division of University Branding and Strategic Communications.

When Moneerah Alayar entered an undergraduate metal arts class in Kuwait, she was eager to learn.

After all, she had been making jewelry since her mother had taught her at age 13.

But, in that class, she was only allowed to learn one metal technique. And she couldn’t even use the equipment.

“As a woman, I was told I was not allowed to use the drill because it was too dangerous for me, and I had to give my metal piece to the male teacher’s assistant who would make the needed drill holes for me,” she says. “No other discussion was had, and I simply had to accept that as a logical answer.”

That began her journey as a feminist metal artist. With her newly earned Ph.D. in Art Education, Moneerah Alayar will become the first Kuwaiti woman to teach metal arts in her homeland this fall as an assistant professor at The Public Authority for Applied Education and Training, Kuwait.

“This incident from 11 years ago has influenced me immensely as an artist and teacher, pushing me to want to understand, explore and eradicate gender oppression in Kuwait,” she says. “I want to be able to teach and to provide a model for other women in Kuwait to see what they can accomplish. I also want to help give a voice to women artists in Kuwait, especially in the field of metal arts, which is a very uncommon field for women to enter.”

Moneerah came to the U.S. to learn more in her field. As she pursued an M.F.A. at the Rochester Institute of Technology in New York, she was able to learn new techniques that increased her skills in metalworking and expanded her creative ability that includes jewelry, textiles and sculpture.

But she knew a Ph.D. would challenge her, as well as teach her how to become a better art educator and a stronger advocate for women. She enrolled at UNT because of its reputation for critical inquiry into social issues and its wealth of artistic and scholarly resources that allowed her to conduct research and practice her craft.

But the differences between the U.S. and Kuwait challenged her to see how different nations treat their artists, and it allowed her to interact with new disciplines and media.

“At UNT I have ‘woken up’ and grown as a student, artist and teacher who is also a woman, a wife and a mother,” she says. “My classes have pushed me to see things in new ways and consider philosophies that I had never been exposed to.”

And that includes her craft.

“What got me interested in being an artist is that I want to be able to express and feed my creativity to expand my imagination,” she says. “I want to share my message with the world, and see my art touch someone’s soul.” 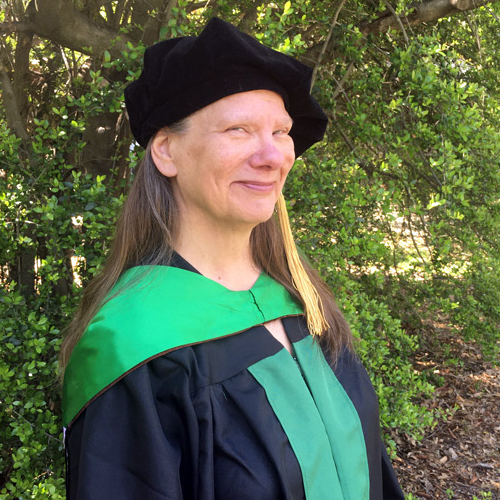 Marianna Seaton has been an artist all her life, but she “fell off the studio arts path” after leaving art school as a young adult.

Instead, she earned a bachelor’s in Human and Family Development at Empire State College – State University of New York, Saratoga Springs, N.Y., and then moved to Texas in 1998 with her husband, Lynn, who had accepted an appointment with the UNT College of Music. She homeschooled their son Aubrey, who completed his UNT Media Arts degree last spring, and she volunteered with La Leche League International for several years.

It was after serving as director of lay ministry at Horizon Unitarian Universalist Church in Carrollton, Texas, that she decided to return to school — and studio art.

“It was just the right time to hit the reset button,” she says, “and get back to what had been whispering in my ear to do for many years.”

At an art exhibition at UNT on the Square, where she later worked, Marianna met a student who told her about her favorite art professors and encouraged her to apply. And she did.

Now seven years later — including four years of undergraduate classes as she developed a body of work — she’s receiving her Master of Fine Arts in Studio Art with a concentration in Drawing and Painting.

She works in graphite and mixed media, with a focus on “the interrupted landscape” and forgotten or discarded items such as cardboard boxes that reflect commerce and consumption and our mark on the world.

She says she has loved being a student and found it easier to focus now than when she was younger. Navigating the technology was somewhat harder.

“I’m an analog girl in a digital world,” she says. “I prefer pencil over keyboard.”

Also challenging over the past year was the socially distanced learning, which required viewing artwork over a computer screen. It helped that she was able to have some face-to-face studio visits with her professors.

In another change due to COVID-19, graduate students could invite the public to their virtual thesis defense. Her exhibition Golden Anecdoche was presented on Zoom for a remote audience and in the Cora Stafford Gallery for her thesis committee.

Among the “many great professors” who had an impact on her were the members of that committee — Annette Lawrence, Matthew Bourbon, Christian Fagerlund and Andrew DeCaen. She also had the opportunity to study with art historians Dr. Nada Shabout and Dr. Jennifer Way.

“I can’t rave enough about the quality of the professors in CVAD,” she says. “They model what it is to be a successful artist and are dedicated to their students’ development.”

After graduation, as she continues developing artwork for exhibition, Marianna plans to build a working home studio and open the doors to the community for art classes and conversation.

Her advice to anyone considering returning to school is simple: “Jump in and do it. It’s invigorating to push yourself beyond your comfort zones.”

“We only have one life to live,” she says, “and we can re-invent ourselves as many times as we choose to. Follow your heart and say yes whenever you can.” 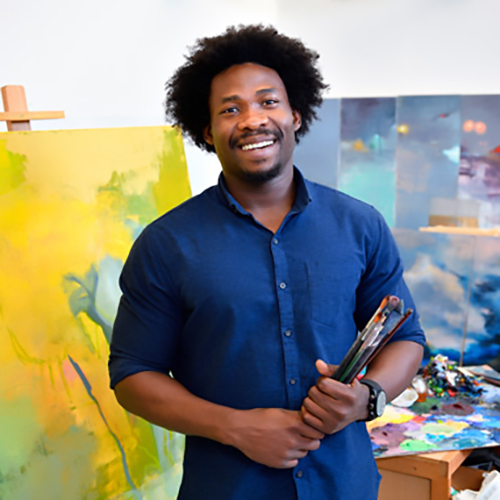 Augustine "Austin" Uzor isn’t one to talk too much about his art, preferring to let it speak for itself. And, he'll tell you, he’s not looking for external recognition — drawing and painting are the outlets that allow him to explore and communicate a complicated personal journey, one that began in Nigeria and, nearly five years ago, led him to Texas.

Sometimes, the Studio Art graduate student — who will earn his M.F.A. in Drawing and Painting this spring — feels like a puzzle piece that’s been stored in the wrong box. He doesn't quite click into place anywhere.

“My story is always evolving — that’s the essence of being alive,” says Augustine, who in July 2016 was granted a green card to move to the U.S. He returned to Nigeria for his sister’s wedding in late 2018, where he found that the home he had known for 25 years no longer felt so familiar. “So in some ways, it’s like I’m just floating, just existing between two places. That made me want to discover a world of my own through art as a way to heal that trauma and to find solace in helping people understand what I’m experiencing and see it for what it is.”

In 2013, Augustine graduated from the University of Nigeria, Nsukka, and began building an impressive reputation as an artist. But he suspected Nigeria would never offer as many opportunities as the United States. So with his mother, younger brother and older sister in tow, he braved Dallas’ blazing hot summer to begin a new life.

For the first two years, he worked odd jobs. And though Augustine was able to pay the bills, he knew he wanted something more — specifically, to attend graduate school, where he could continue to develop his artistic talent. After learning about UNT’s nationally recognized College of Visual Arts and Design, he applied.

“I have these dreams and aspirations, and whenever I have those visions, I do not let anything get in my way,” Augustine says. “I want to see those dreams become a reality.”

He began the Studio Art master's program in January 2019 and was selected to be a teaching assistant for Drawing II classes. In August 2019, he became a CVAD teaching fellow, where he has instructed Beginning Painting classes. His role as a teacher has required him to break down the artistic process, forcing him to ask the kinds of questions that have led to a deeper understanding of his own work — like how, for instance, do colors truly come together?

Teaching during the COVID-19 pandemic brought previously unconsidered challenges, though many were welcome, Augustine says. He learned to develop ways to make art accessible in an online environment.

“Teaching remotely was something new and exciting — you have to push yourself to see how you can problem-solve,” he says. “It’s the kind of situation that can bring out the best in us.”

As an artist, the pandemic further emphasized the isolation he often explores in his work and has helped others more deeply understand that feeling of disconnection. The walls of his Bain Hall studio are lined with dozens of paintings, all of them tapping into his experience of being an immigrant. As part of his M.F.A. thesis, he exhibited the pieces under the theme of “Memories of the Future” at the Greater Denton Arts Council.

“Everyone has their own experience — I’m very conscious about that, about not triggering anyone,” Augustine says. “But if I share my art, people feel more comfortable relaying their own journey, and we can open up about those things."

That, Augustine says, is the true beauty of art — finding a home for your voice. And UNT has been an exceptionally welcoming environment for that journey.

“I’m super grateful for the people here — the students, the staff, the entire administration,” says Augustine, who plans to continue his work as a studio artist after graduation. “During my last few weeks here, I’ve been walking around campus thinking, ‘I wish I could stay longer.’ UNT will always be close to my heart.”