Special congratulations to Kelli Connell, 1997, B.F.A., photographer and professor of photography at Columbia College Chicago, who was selected as a 2022 Guggenheim Fellow! 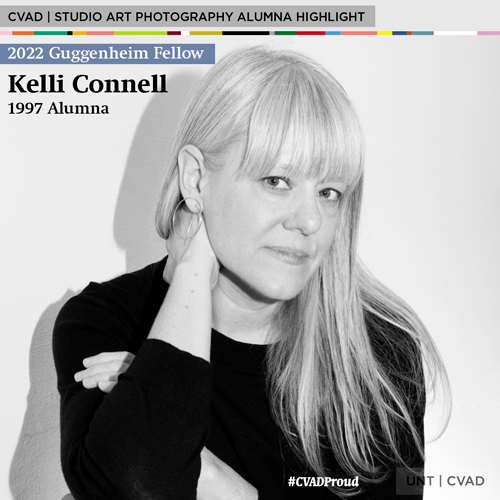 Professor Connell is among those chosen from a rigorous application and peer-review process out of almost 2,500 applicants to receive a Guggenheim Fellowship. The 180 successful applicants were appointed based on prior achievement and exceptional promise by the John Simon Guggenheim Memorial Foundation.

Created and initially funded in 1925 by Senator Simon and Olga Guggenheim in memory of their son John Simon Guggenheim, the foundation has sought since its inception to “further the development of scholars and artists by assisting them to engage in research in any field of knowledge and creation in any of the arts, under the freest possible conditions.” Guggenheim Fellowships are grants made for six months to 12 months with amounts ranging from $30K to $45K.

Connell’s work investigates sexuality, gender, identity, and photographer-sitter relationships. She strives to make work that challenges the societal norms and conventional understandings associated with these topics. Her work is in the collections of the Metropolitan Museum of Art; Microsoft; the Los Angeles County Museum of Art; the Columbus Museum of Art; the Museum of Fine Arts, Houston; the Museum of Contemporary; the Dallas Museum of Art and the Philadelphia Museum of Art. Connell also holds an M.F.A. (2003) in Studio Art from Texas Woman's University, Denton, Texas.

In all, 51 scholarly disciplines and artistic fields, 81 different academic institutions, 31 states and the District of Columbia, and four Canadian provinces are represented in this year’s class of Fellows, who range in age from 33 to 75. Many Fellows’ projects directly respond to issues such as climate change, pandemics, Russia, feminism, identity and racism.

Note: Should you need a reasonable accommodation due to a disability to fully participate in a CVAD event, please contact the CVAD Dean's Office, cvad@unt.edu, 940-565-4001. For voice access, dial 1-800-RELAYTX (735-2989). Please make the request as soon as possible to allow sufficient time to arrange the accommodation.